With the rapid evolution of industries and their rapid growth, the interest and demand for power and hand tools have enhanced over a considerable period of time.

These power tools are particularly used for manufacturing purposes and in construction sites or wood working industries as well. Two of the most popular American brands which are expanding to a massive extent in the production of power tools are Porter Cable and DeWalt.

Porter Cable VS DeWalt, how do you choose the right tool for your job?

With varying commercial paths and motives, both are held in high reputation not only in the States but also worldwide. Although both focus on manufacturing power and hand tools, there is a huge distinction between Porter Cable and DeWalt which can be very well justified owing to the substantial price gap.

In case you are concentrating on the growth and expansion of industries, it is recommendable to go with DeWalt since this brand continues to lead in both professional industries and DIY; when it comes to the manufacturing of the best power tools, it is invariably DeWalt.

For construction purposes to home garages, every purpose is served by the tools and equipment of this brand.

On the contrary, when Porter Cable is brought under consideration, it will serve as a better budget option.

If you walk into a rigorous professional or business site, you are bound to find people working with hand tools of this brand.

This definitely is not a testament to its inferiority since it is not.The aforementioned information can very well substantiate which brand you should consult in order to serve your purposes. However, tools sold by Porter Cable are relatively much of a greater budget option.

Both Porter Cable and DeWalt are of American origin and their companies are placed there, they emerged in the early 1900’s and has earned enormous fame and reputation ever since.

DeWalt started gaining popularity and rose to fortune immensely through their radial arm saw which was an absolute industry changer and was in high demand. This was invented by the company’s founder, Ray DeWalt.

On the other hand, Porter Cable received a similar reputation and has been held in excessively high regard ever since 1920’s. The production of their wide range and diversified electric belt sanders and the hand held circular saw was profiting owing to their great demand and quality. Coming to the significance of the name of the companies and their emergence, Porter Cable cannot be mentioned without remembering the great Art Emmons who oversaw and has witnessed the division of engineering and design for more than four decades starting from 1920 until his retirement in the late 60’s. He played a humongous role in building and creating the brand or company which has grown almost into an empire today.

On the retirement of Emmons in the late 60’s, the very existence of the name of Porter Cable was wiped out when it got sold to the Rockwell Corporation. Henceforth, there was a drastic reduction in the production costs and quality as it was competing with Black and Decker’s line of super budget home and power tools.

In the mid 80’s, the Porter Cable company came back to life with its previously lost reputation, fame and demand along with maximization of production with respect to both quality and quantity.

In a sheer coincidence, of late, both DeWalt and Porter Cable are owned by reputable American conglomerates namely Stanley Black and Decker. However, the DeWalt Company continues to manufacture better and everlasting power and hand tools which are of comparatively higher quality than those of tools from Porter Cable.

The latter is a more reliable budget option as their primary motive lies in competing with other budget options such as Harbor Freight, Ryobi etc.

Facilities on the basis of warranty and manufacturing

This is how a Porter Cable combo kit essentially looks like, extremely appealing and equipped. 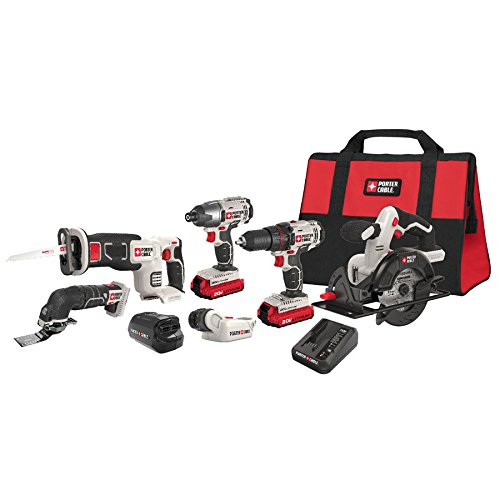 The kit comes with a ½ inch grill/driver which genuinely offers 283 unit watts, two-speed gear box, compact designs, ½ inch chuck and a naturally built-in LED light.The few purposes that this kit serves along with its equipment mentioned below are:

The above picture is a typical glimpse of how the power and hand held tools from DeWalt looks like.

The tools are highly advanced for massive purposes and repairing or manufacturing involved in hefty tasks. Few features along with their components are enumerated below: It is difficult to recommend a particular brand in general since both are the best in their own ways and fulfill completely different aspects. However, if you ask me in which must one invest for the sake of a better lifespan and quality, I would without any doubt say it is DeWalt.

However good the product might be, durability, quality, and other essential features are what define it. Tools from DeWalt are manufactured with the best to best quality materials with enormous enduring capacity and ensuring excessive warranty.

In case you are trying to repair some furniture or commodity in the house, there is nothing wrong with using Porter Cable tools because in such cases you obviously cannot utilize the high power and advanced DeWalt tools.

Considering the kind of DeWalt admirers we are, do give Porter Cable a shot because they are never a disappointment either.

Milwaukee Vs Makita: Which is The Best Power Tool Brand?
Next Post: What Is An Inverter Generator? Power Up Your Knowledge About Your Generators