Rockwell Jawhorse RK9003 via Amazon
"I hope you love the products I recommend! When you buy through links on luxuryhomestuff.com, I may earn an affiliate commission."

The saying goes that a craftsman is only as good as his tools. You give him the tools he needs and he’ll be at his crafting best. One of the basic requirement for a craftsman of any nature is a workshop. If you are a DIYer than you need it, without any doubt, more than anyone else as a workshop can give you focused time and environment for crafting your creative ideas. 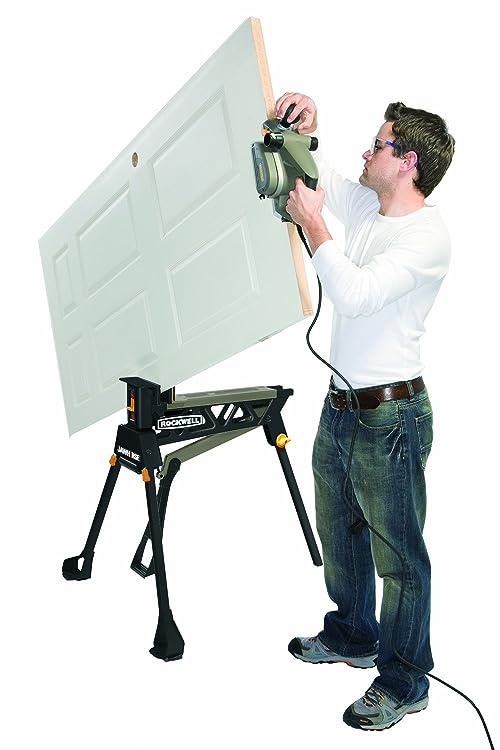 The basic purpose of a ?work bench? is holding and clamping. These two tasks important in any workshop for easy crafting and mending. Now a day’s portable tools are available with multifunctionality and lot of brands are out there. 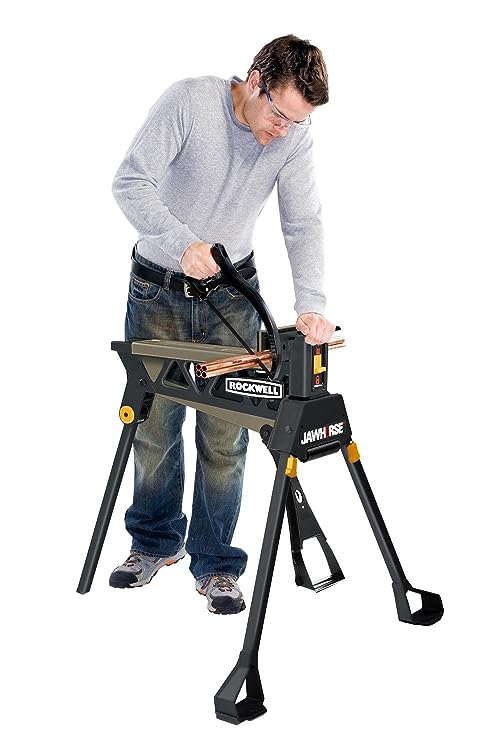 While there are a lot of good ones made by lots of different manufacturers out there on the market, each with different sizes and materials equipped with different features. Workbench, clamps, bench, sawhorse, are one of the basic tools that need to be present in any workshop.

Here we are going review one of the best portable equipment (if not arguably the best) that has all these features present in single built.

The Rockwell Jawhorse RK9003 (2nd Gen). It is one of the best portable workbench available in market. It is multifunctional and has many accessories to ease your crafting work. 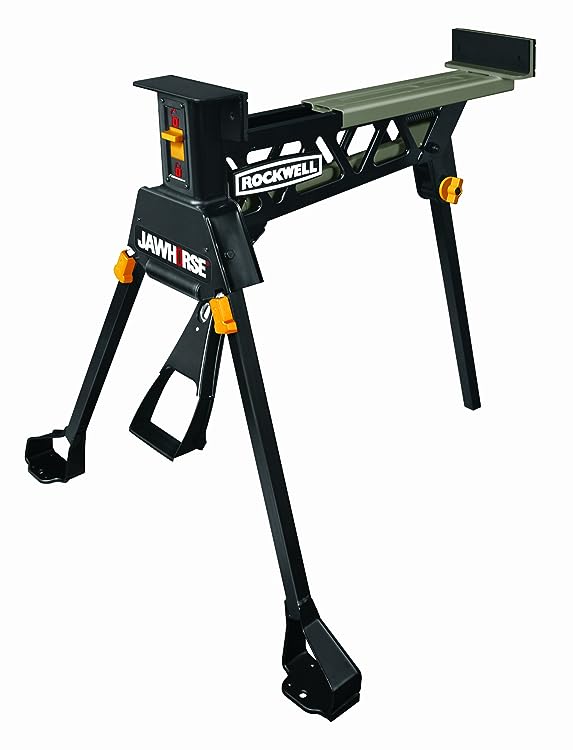 The Rockwell Jawhorse RK9003 is the go to workbench for any craftsman be it for intricate or brute force projects. This is a very handy yet portable workstationn that ensures that your hands remain free from all the holding and clamping of your raw material and instead your hands are free to do what they were meant to do; create.

It works chiefly on two flathead clamps. One end is fixed and can’t be adjusted. The other end slides along a rail and gives you the flexibility for the dimensions of the subject that’s meant to be placed between the clamps. How it works is, you push the one end of the subject, a wood sheet for example, up against the secure clamp of the workbench. Once it’s in there, you just slide the movable clamp along the rail until it connects with the other end of the wooden sheet. Now press it up against the end real nice and just slide the lock on the clamp to set it in place. As an added insurance, you have a foot pedal lock too, which you press with your feet and voila! The piece is secured within the bench and will only come off when you decide that you’re done with it. 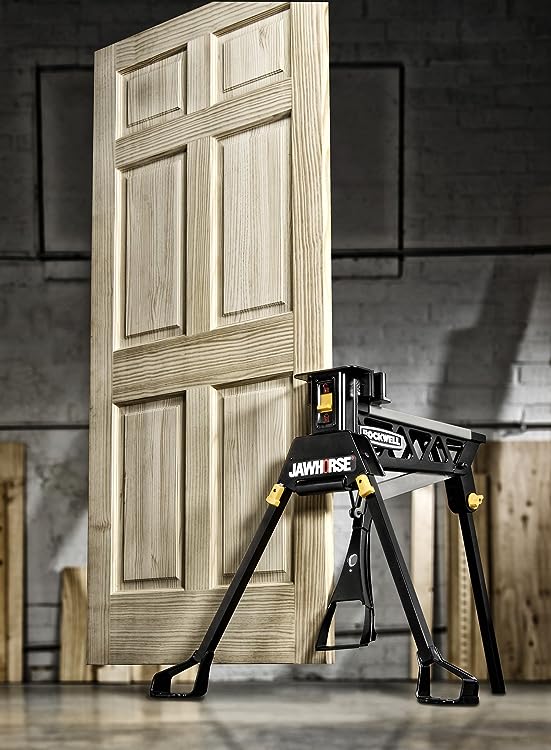 There are lots of key features in the Rockwell Jawhorse RK 9003 that make it stand out from the others on the market. They are discussed below:

The chief feature (whose operation we already discussed) is the foot pedal lock. This neat little addition makes sure that you won’t need to be fussing over the locking mechanism with your hands and that your upper limbs are free to go about their crafty (pun intended) business. Did I mention that the Rockwell Jawhorse RK9003 has a clamping force of up to one ton? Let me say that again just for luck. ONE TON! Imagine something being placed under the foot of an 8000-pound elephant. The force that the object is experiencing is roughly one ton.

Yes, that’s how much a ton of force really is. But don’t worry because your subject won’t become pancakes (like pretty much anything that is placed under an elephant’s foot) even after being subjected to that much force thanks to the specially designed, non-marring grips which ensure that the subject remains undamaged. Another big plus point is that the Rockwell Jawhorse is quite portable. It can easily be folded into a compact assembly and laid to rest on a shelf when not in use and won’t be taking up half your garage when it’s just sitting there as is the case with lots of models available. The tripod build ensures extra stability. Portability of Jawhorse via HomeDepot

It has an auto-locking assembly feature due to which all the locks set in once the workbench is in an upright and erect position. These locks are a real safety pro feature and they ensure that your workbench does not collapse during the middle of a project and compromise your work or worse, lead to a serious injury. The build is rugged steel through and through and gives you that extra strength and durability. It can support weights of up to 600 lbs giving you the option for your heavy duty needs as well. It has rugged wheels attached on one end and the other end doubles as a handle so that the workbench can easily be transported to and away from the workplace with minimal effort. 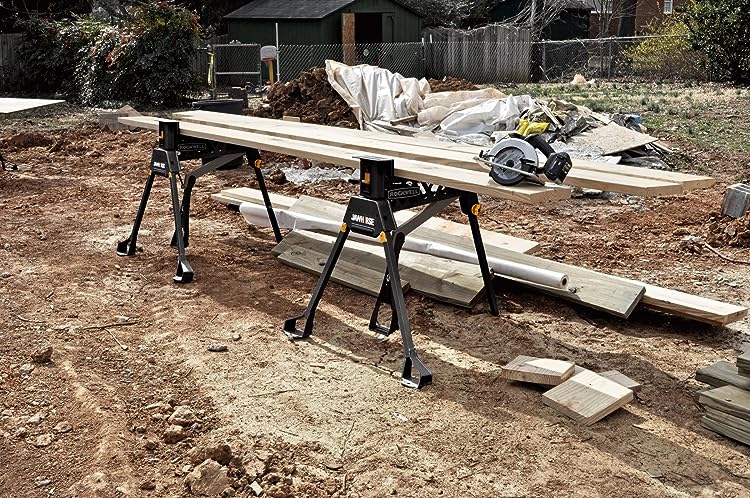 The standard dimensions for the Rockwell Jawhorse are 39 x 35 x 38 inches as far as L x W x H are concerned. This model can wood sheets of up to 37 inches. It comes in a multicolored assembly. It weighs 47 lbs.

The Rockwell Jawhorse RK9003 can be purchased easily from any major hardware or general store. It is priced around hundred bucks depending on the seller.

The Rockwell Jawhorse RK9003 comes with a bunch of accessories that can transform this workbench to a workspace. Some of these accessories are listed below: 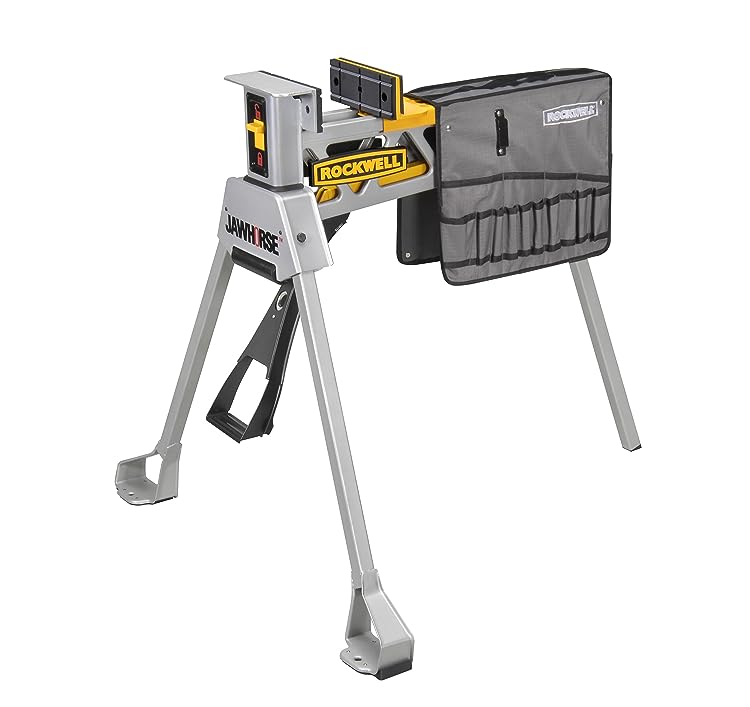 This handy accessory hooks up with the rail of the workhorse and provides a convenient tool pocket for you on the go and saves you a whole lot of effort and time. It can easily be attached or removed and can be rolled when needed to stow away. It’s made of nylon, which is highly ripping resistant and washable. This accessory is much similar to the saddle bag but it’s a tool tray instead of a bag for people who like their tools to be laid out in front of them rather than fuss around with a bag. This can be easily attached and removed from the workbench without tools and can be folded compactly for transportation.

This accessory is really one for the wood workers. Just the thing if you need some sawing to do on your workbench. This provides safety, stability and moreover accurate and efficient sawing. This accessory is truly a thing of beauty! It attaches to workbench and gives you extra hands for welding two pieces together. The main aluminum jaws hold one piece and the piece the needs to be welded on is clamped to the other adjustable set of arms. They can be adjusted at almost any angle and help bring the two pieces together in the perfect position to be welded. This is another one for the wood people! It is a kind of extra arm attachment that extends the range of the Rockwell Jawhorse RK9003 so that larger pieces can be put into the tray. It comes with its own stand for extra stability.

I adore this thing to such an extent. I have a little and uneven work territory, so the capacity to utilize only one sawhorse rather than two is a major offer assistance. The JawHorse is anything but difficult to set up, generally simple to move around, and super simple to utilize.

The bracing force is to a great degree solid (so be cautious - I pressed one anticipate too hard and broke it). Mine has been sitting outside in the rain and is by all accounts doing fine. It is solid and looks well-made. I prescribe perusing the directions and taking the right approach to cinch and discharge.

(I've seen some online recordings that miss the point!)I'm not a worker or a paid analyst, only a jazzed client who is pleased with my buy.”

By garedawg“ Best instrument I have ever bought, and I have a carport full. Simple set up and much less demanding to utilize. When you wrench the jaws shut on something, it WILL NOT move.

So, decent to have hands free when fixing down on a table or end table. Purchased it used, it showed up fresh out of the box new. Only the box was little damaged. I use it about each day.5 stars.”

The Rockwell Jawhorse RK9003 is one solid piece of hardware and a must-have for anyone who is remotely related to the crafting field. It can clamp virtually anything together.

Combined with the right accessories jawhorse work table can be used for virtually any job when it comes to handy work. You can use it for welding, sawing even for holding something irregularly misshaped as an engine block.

Doesn’t matter if you’re a professional or just a do-it-yourself hobbyist, the Rockwell Jawhorse can be the rock you need (once again pun fully intended) for all of your clamping and holding needs. You just can’t go wrong with it! 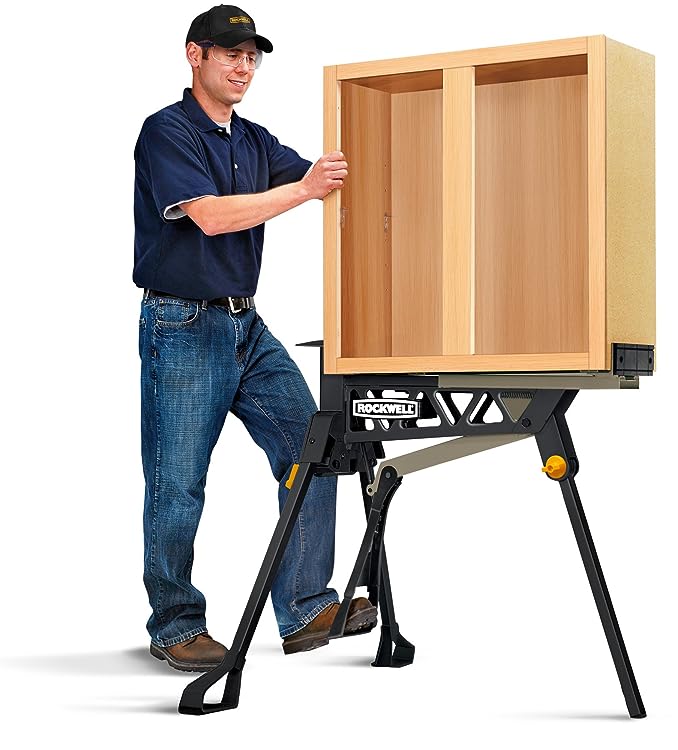 Tools You May Need For Your Woodworking Projects:

30+ DIY Gifts For Boyfriend: Simple and Small Handmade Gifts For Him
Next Post: 22+ Painting Pallet Tips And Ideas: Two Steps Before Painting Your Wooden Pallets